Welcome to Signal Problems, a weekly newsletter helping you figure out what is going on with the subway. I’m Aaron Gordon, a freelance writer covering many subjects, one of which is transit for the Village Voice.

A few people asked about recommendations for best apps to navigate the subway in real time. I’m planning on expanding this and other topics into a permanent webpage to answer basic questions for new subscribers, but for now, let’s just say: Citymapper. Use Citymapper.

If you are enjoying this newsletter, please help me get the word out. I don’t have the resources to promote it beyond the very basics. In addition to the ever-appreciated social media post, another easy thing is if people at work are complaining about their commute on Slack or Slack equivalent, drop a link in there to https://tinyletter.com/signalproblems and say a nice thing or two. Tell them there are dog pics. That always helps.

Yes, there are dog pics.

Speaking of which, keep those Dog in a Bag submissions coming! For this or anything else, send an email to aaron.wittes.gordon@gmail.com (Tinyletter's reply feature is fine for text but doesn't work for photos). As someone on a stalled Q train once told me, we're all in this together.

A lot happened this week! The big news comes via the Daily News, who uncovered emails showing the MTA purposely goosed statistics to blame as many delays on Con Edison as possible. In short, they increased the number of power-related delays from some 8,000 over a 12-month period to THIRTY-TWO THOUSAND. They even included incidents where power was intentionally cut off. Apparently, this came at the urging of Cuomo’s people.

No one comes out of this looking worse than MTA Chairman Joe Lhota. Did he acknowledge this was gross malpractice, even fraud? No. Did he fire the person responsible? No, no. Instead he doubled-down by telling the Daily News that everything is above board, nothing to see here. “Are you gonna tell me power cut from the tracks is not a power-related problem?”

Uh, yeah, fuckin' A I am, Joe. It's so deeply concerning that he's even pretending to believe this. For example, if there is a man on the tracks and the MTA cuts power to the third rail so the man doesn't get electrocuted, Lhota doesn't see a problem with this being categorized as a power-related failure. It's like when you're stuck in an especially bad traffic jam and people shut off their cars to save gas. Would you blame the traffic jam on everyone's car being off? No, you would not.

Lhota also dismissed the analyst who pushed back on this categorization as a “bean counter.” Now, aside from the fact that a performance analyst’s job is very much to count things, imagine you work in some statistical capacity at the MTA, of which there are hundreds of such employees. How would you feel reading this? How would you feel that one of your colleagues is being thrown under the bus and disparaged by the head of your organization for being the only one doing his damn job?

You can check out my analysis of this BS at the Village Voice, but the long and short of it is: given the floating definition of “good service,” “train traffic ahead,” and everything I wrote last week about how the subway performance stats are very difficult to take at face value, the MTA has a huge credibility problem at the most basic level. Why should we ever believe anything they say?

News You Probably Can't Use, But About Which You Can Certainly Brood

On to next week's service advisories, not including the, uh, unplanned service changes which are sure to come:

I wouldn’t take the D after 9 PM next week. It’s running along the A in Manhattan and skipping a few other stops in Brooklyn. Just…don’t.

F and G Queens-bound trains skip Ft Hamilton, 15 St-Prospect Park, and 4 Ave-9th St 9:30 AM to 3:30 PM this week. If you absolutely need to get to these stations you can overshoot your destination then switch to Church Ave-bound trains.

No 4 trains between 149th St-Grand Concourse and 125th St after 9:30 PM. Shuttle bus or die. The 4 will also run local below Grand Central.

J and M trains headed towards Manhattan will skip Flushing, Lorimer, and Hewes between 9:30 AM and 3:30 PM weekdays until February 16. This is part of the track replacement program that is installing seamless rails. Note this has been extended an extra week.

Late night L will be running every 20 minutes starting at midnight. This week only in theory.

Hudson Yards-bound 7 trains will skip 69, 42, 46, 40, and 33 Sts from 9:45 AM to 3:30 PM Monday-Friday until February 2. This is also happening on weekends and is part of the Subway Action Plan announced last summer. They're replacing rail joints with seamless track which breaks less often. Also on the 7, there will be no express service at all times starting February 17 until March 12, except for the very eastern portion from Main St. to 74th St. Unfortunately, this isn’t a service disruption to improve performance, although I suppose the train falling onto the LIRR tracks below the 61st St station because of the disintegrating support beams would constitute poor performance. Line Ratings: Using the fantastic Subwaystats.com website, I've compiled weekly ratings for each line. Each number represents the percent of time the last week (Thursday-to-Wednesday) that the line had "Good Service." For example, if the number is 70 percent, that means the line had "Good Service" 70 percent of the time and any form of disruption—planned work, delays, service changes, etc.—the other 30 percent.

This is just one of many ways to measure a line's performance. It's not perfect. For one, it relies on the MTA's definition of "Good Service," which there are very good reasons to doubt. On top of that, most people would prefer a line be down all weekend for planned maintenance but not for the two hours during rush hour. I wish the MTA compiled Lost Customer Hours like Transport for London does, but then again I wish the MTA did a lot of things. 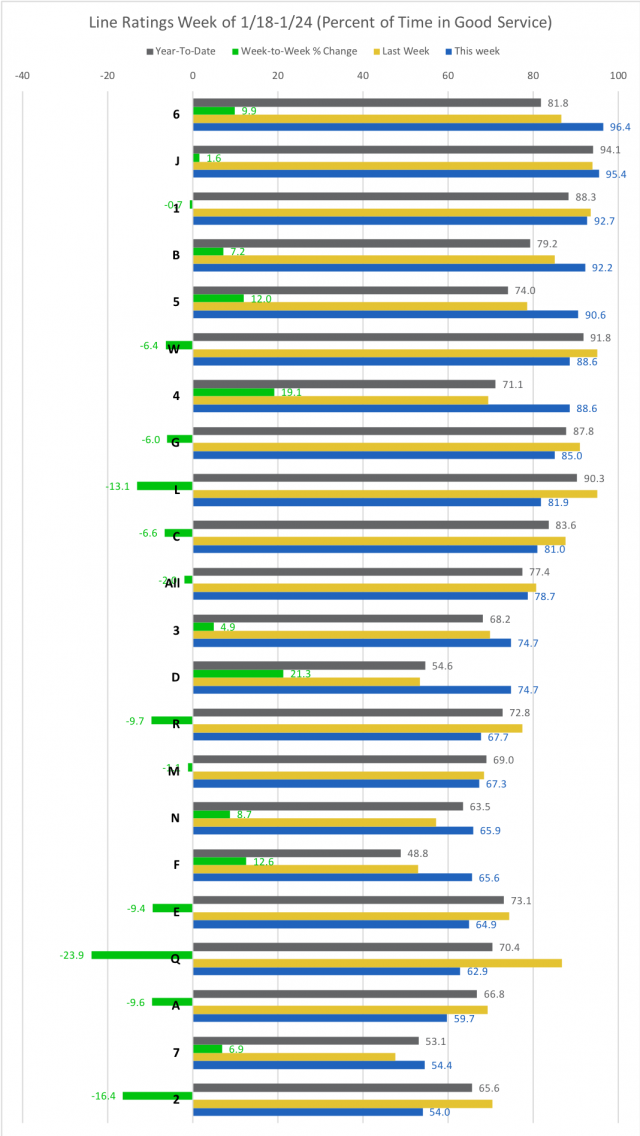 Overall, there were no meltdowns this week to report. The Q, 2, and L under-performed this week due to planned work. Because I only started collecting this data at the beginning of the year, planned work is going to have a bigger effect than it should on YTD numbers. As the year goes on, we'll get a more complete picture of how these lines are functioning and I can do more in-depth analysis on how things are changing over time.

A quick note about the J. The YTD reliability is quite high, hovering around 94%, despite utilizing some of the oldest trains in the Western hemisphere. That's because the line runs under capacity. They could run up to 25 trains per hour, but opt to run 19 instead. That leaves a lot of wiggle room in case something goes wrong. But that will change during Lpocalypse.

I’m feeling pretty good this week my friends. The MTA board met on Monday in what was new NYCT president Andy Byford’s first. Byford is the real deal. The degree of professionalism and competence he brings to this organization cannot be understated. He cuts through the bureaucratic BS and is not afraid to state the obvious. On multiple occasions, board members and MTA executives had prolonged debates spouting bureaucratic nonsense while dancing rhetorical circles around each other, accomplishing nothing in the process, before Byford spoke up and cut to the heart of the issue in a two-to-three minute segment. It was a thing of beauty, really. I outlined one such instance in my recent Village Voice piece. If you want to experience the Byford effect for yourself, he was on the Brian Lehrer show yesterday. It's a half hour interview but I think well worth your time if you're looking to get a sense of his deal.

Combined with the surprisingly comprehensive congestion pricing proposal, there’s a palpable sense of optimism in the transit community right now. Increasingly, people who have worked in this space for decades feel there’s a unique moment where the needs are apparent, the political will is greater than ever, and there is fresh blood in MTA leadership up to the challenge. We can dream, at least.
Your Weekend Advisories This is not a complete list of all the service changes and outages. But the MTA Weekender is clunky, clumsy, and annoying to use, as the interface hasn't been updated since 2012. So I've summarized here the disruptions that require major re-routing, which I define as the ones that make me go "Ah, crap." For a complete list of all the service changes, head over to the MTA Weekender website.

I wouldn’t take the D. It’s not stopping in Manhattan and skipping all kinds of other stops. Just…don’t.

The F isn’t running south of Church Ave. Sorry my southern Brooklyn friends, but the N and the Q are still available for your service. In theory.

Hudson Yards-bound 7 trains will skip 69, 42, 46, 40, and 33 Sts every weekend until February 4. This is part of the Subway Action Plan announced last summer. They're replacing rail joints with seamless track which breaks less often.

4 and 5 trains will be running local every weekend in January. I'm so sorry, everyone trying to traverse the East Side.

Like on weekdays, J trains headed towards Manhattan will skip Flushing, Lorimer, and Hewes this and next weekend (ending Feb 4). This is part of the track replacement program that is installing seamless rails. I wonder if they’re running behind schedule so they expanded work to the weekends.

Two ongoing, long-term projects you are probably already aware of:

Due to the ongoing Viaduct reconstruction until April 30, M trains don't run between Myrtle-Wyckoff and Myrtle Ave. There are shuttle buses, but come on. As if you didn’t need an extra reason to avoid the M on weekends, there won’t be any M service at all on the rest of the line on weekends until February 4 due to track replacement.

The 2/3 tunnel reconstruction continues apace until Summer of 2018. Don't try and take the 2 or 3 between Manhattan and Brooklyn. I live off the 2 but avoid it like the plague on weekends.

Meanwhile, in the Rest of the World

Spain inaugurated a new section of high speed rail between Valencia and Castellón, reducing the travel time between the latter and Madrid by 38 minutes. Seoul will offer free public transportation during rush hour on days when air pollution is bad, following Paris and Milan's lead. There's a viral video going around of 1,500 Chinese workers building a new railway station in 9 hours. While China is indeed kicking our collective ass in mass transit construction, I'm not sure we should strive to emulate their working conditions.

Angry MTA Mention of the Week

From @TheAlexHopson: “Due to an earlier incident at Lorimer St, Northbound #G trains are now being pulled by a team of oxen #MTA”

Bonus angry MTA mention of the week from @afishb: "Whenever you feel powerless as an individual, remember that one sick passenger has the ability to singlehandedly break the MTA."

Dog in a Bag

This is Weezy. Please also enjoy this Instagram video of Weezy on the subway. 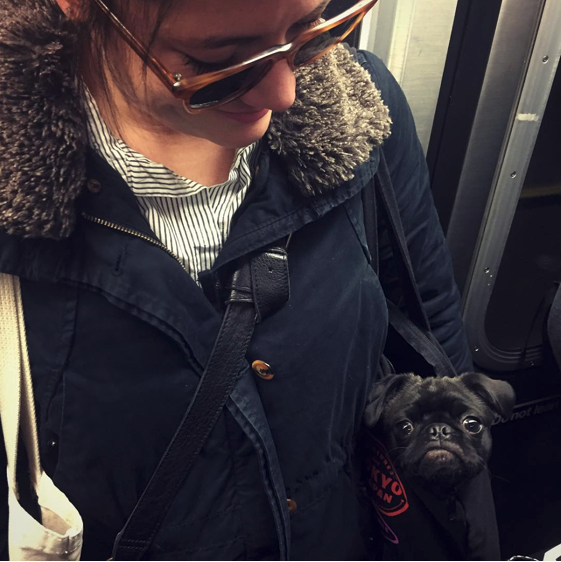 For your security, we need to re-authenticate you.